The 2013 Iniscealtra Community Shield was again played on a beautiful spring day. There were nine teams involved, playing a total of 19 matches, at the end of which last year’s champions, Clare Corinthians, claimed the trophy they’d held since last year.

This was a charity event, and a much-needed €1015 was raised for Ennis and Clare Samaritans.

There were four teams in the morning group:

This was a fairly even group, with not much between the teams as they headed into the final round of games. Regulars at the tournament LIT All Stars had already qualified for the semis when they met Mixed Bag Dynamos, but victory for the Dynamos meant they finished top of the group, ahead of LIT, and this also meant that newcomers East Clare Dynamos couldn’t qualify when they met Aerowind in their final game. Aerowind’s best performance had been in their second game, when a thrilling encounter saw Aerowind to come from behind twice before a late Mixed Bag winner. East Clare Explorers were unlucky not to go through after performing well. They could be ones to watch next year…

There were many great games in this group, with several strong contenders to make it through to the knockout stages. Aside from newcomers Sanford United, who will surely learn from the day and come back stronger next year, all the teams looked like they had a chance of progressing beyond the group. In the last round of games both the Patriots and Sean Bean had a chance of going through, but couldn’t quite make it – Slippery Chickens and Clare Corinthians went through. Before this final round there hadn’t been more than a goal’s difference in any of the games between these four teams.

The first semi final saw Mixed Bag Dynamos play Slippery Chickens. These two teams know each other well, and they played out a thrilling and close encounter which produced just the one goal. There wasn’t much difference between the two teams, and the Dynamos, who were trailing, nearly snatched an equaliser right at the end. It wasn’t to be, however, and Slippery Chickens progressed to the final.

The second semi final saw Clare Corinthians play LIT All Stars. Somewhat ominously for the All Stars, the Corinthians had been improving steadily through the day, and were beginning to show the form we saw last year when they won the shield. These omens came to pass as the Corinthians won convincingly. 3-0 was the final score.

The final, then, saw two teams who had met in the group stage play each other again. That game had been a close encounter, but on this occasion the Corinthians were much too strong for their opponents and they won the game 5-0.

This year’s tournament was a big success – thanks go to those who made it possible:

Scarriff GAA Club, who provided the venue free of charge.

Denise, who handled the admin on the day.

Gill, who ran craft and games for the under 12s (ably assisted on the day by Marianne).

All the teams, who brought enthusiasm and a great sporting ethos to the event.

Last, but certainly not least, our referees on the day, Owen and Clive. They gave a lot of time and expertise, for which we are all indebted.

The venue is the Scarriff GAA all-weather pitch on Sat May 25th.

There will be two groups of five teams. Each team will play the other teams in their group in a league. Standard points allocation applies. The top two teams from each group will progress to the knock out stages (semi finals, final).
Registration of teams and payment in full must happen before start of play.

Registration for Group A will take place between 9.30am and 9.45am; Group A matches will kick off at 10.00am.
Group A Teams:

Registration for Group B will take place between 12pm and 12.15pm; Group B matches will kick off at 12.30pm.
Group B Teams

Any team that delays the start of a game by 5 mins will concede that game 1-0.

Please note – this year we’ve crafts/activities for under 12s, organised by Gill – running from 11 till 2.

Light refreshments will be available on the day.

Rules of Competition
1. Eight-a-side matches, 15 minutes long, no half-time break. Captains will toss up to choose end before match. Max 2 subs allowed – roll-on, roll-off, player coming off must leave the pitch before the sub comes on. Subs allowed on/off as many times as they wish.
2. Ball allowed to be played in the air as in normal 11-a-side game.
3. Ball kicked out over fence – play restarted by opposing team with throw in or goal kick where it left field.
4. Ball touches outside of net (back or side) – keeper’s ball.
5. Goalkeeper’s area marked on pitch, keeper can only handle ball inside this (but is free to move in and out of area, as are all players).
6. All free kicks direct, opposition must be 5 yards away. No run up is permitted for penalties.
7. Goalkeeper touches ball with hand from back pass, or keeps ball in his hands for more than 6 seconds – penalty.
8. In league stages: if two teams are level on points, goal difference will count, then goals scored, then the head to head record. If still level then a penalty shoot out will be held to decide final positions in group.
9. Knock-out stages: if teams are level- penalty shoot-out; each team takes 5 penalties, then sudden death. A sub may take a penalty. No player can take a second penalty till all team mates have taken one
10. Play will not be stopped unless: injury to goalkeepers, serious injury to outfield player, or head injury. Otherwise play will continue at all times. The ball can bounce off the fence without play stopping. If the ball hits the low wire or lands on top of net – drop ball. Attention should be received off the field of play.
11. There will be no added time, except for stoppages mentioned above.
12. Each team is expected to bring a set of matching shirts or bibs.
13. Each team or player is advised to be covered by insurance (individual or Group) as Mixed Bag United will not accept any liability for injuries or accidents that occur on the day, nor will it accept any liability for the personal belongings of players.
14. Each team should bring water bottles. There is a tap on site. The Red Cross will be present, but you might like to bring basic first aid supplies.
15. Players can register for a second team, but must pay the entry fee for each.
16. In exceptional circumstances a team may call upon extra substitutes, but this can only happen with the approval of the organisers and the captain of the opposing team.

A representative from Ennis and Clare Samaritans will present the winning team with the Iniscealtra Community Shield.
Any queries contact Phil (087-2368777).
Best of luck to all the teams in the tournament. 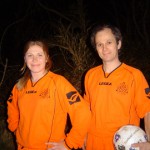 As we mark our tenth anniversary, plans are being made to celebrate this momentous occasion. When we began back in 2003 none of us imagined we’d still be here, going strong, in 2013! For details about our history click on the link below: