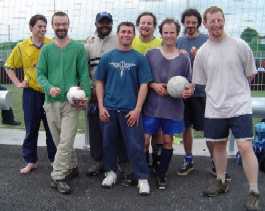 Mixed Bag United was first formed to field a mixed team in a seven-a-side tournament, run by the Ennis Refugee Council in May 2003. This was a great success, and following the tournament the consensus amongst the players was to continue to meet weekly to play football amongst ourselves. The venue for these weekly meetings was Dangan National School in County Clare. We played in Dangan, meeting every Monday night, until the autumn when the daylight hours were too short. We stopped, with no particular plan to continue.

The following spring, however, most of the group were keen to start up again – especially as the Refugee Council was considering another tournament in Ennis. We therefore met up once more in Dangan. Sure enough another tournament did happen – this time a five-a-side tournament. We fielded a team in this.

Up to this point things had been very informal, but due to a request from Dangan School, in 2004, for us to get insurance we collected subs to pay the premium and so became members.

As day length shortened a decision was made to find an indoor venue in which we could play during the winter months of the year, as everybody wanted to carry on playing. The venue we chose was the East Clare Equestrian Centre in Tuamgraney, Co. Clare. Mixed Bag United have played every week ever since.

Warming up on Louisburgh beach, 2004

In October 2004 some of the members headed to Co. Mayo to play a challenge match on the beach near Louisburgh. This was a terrific social occasion, and showed a great level of enthusiasm from members to travel. This enthusiasm has been a consistent factor amongst members throughout our history. 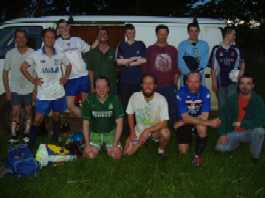 The following spring we realised we had outgrown the small facilities at Dangan,as our numbers had increased significantly, and so we moved to the Canon’s Field in nearby Tulla. The diversity among participants increased significantly during the course of the summer – men, women, boys and girls, young and not-so-young, and people from various ethnic backgrounds numbered in our ranks.

That September a five-a-side tournament was held at the ‘Sonas in Salthill’ Festival in Galway. The theme of the tournament was a world cup with teams representing different nations. We entered three teams – Netherlands, The Isle of Man and Ghana. The Isle of Man reached the semi final. That autumn we returned once more to Tuamgraney. 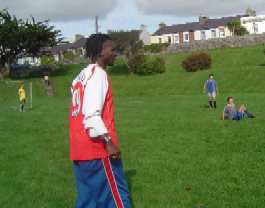 At the end of December 2005 we had the first of our annual Christmas outings. We played football on the beach in Lahinch, Co. Clare, and then went to the local leisure centre for a swim and sauna. We followed this with a meal.

Back in Tulla the following spring some of our older players began a series of occasional challenge matches against a local team of over-35s. We also began to look after the grass cutting on the field, using the services of a local landscaper. 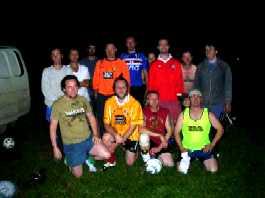 The Christmas outing of 2006 was to Ennis, Co. Clare. We played amongst ourselves in a four-a-side tournament, followed by 10-pin bowling and a meal. Very well attended, the outing was a great success.

In 2007 we decided to cut the grass ourselves in Tulla using the equipment of a couple of the members. We also continued with our occasional over-35 fixtures.The club was formalised by the election of a committee, and ratification of our constitution, at our inaugural AGM held in May. 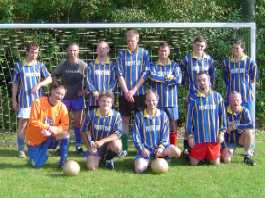 One of the highlights of 2007 was a team trip to Holland for a challenge fixture in Hillegom, SW of Amsterdam. We stayed in Amsterdam over a long weekend in September, and the trip included a training session in Amsterdam’s beautiful Vondelpark.

The Christmas outing in 2007 was again in Ennis, with a (rainy) six-a-side tournament, a very welcome swim and sauna, and a meal. As 2008 begins it would seem a good time to reflect on how far we’ve come so far… and to excitedly anticipate where we will go from here. 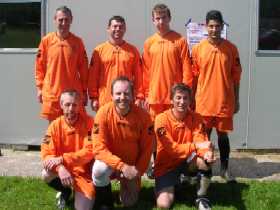 2008 was an important year for the club. Our club badge was designed and in March 2008 the glorious tangerine Mixed Bag United team kit arrived. Now we had shirts to wear with pride, we had all the more reason to take teams far and wide. In July 2008, Mixed Bag entered a team in the Joe Burke Memorial Cup 7-a-side tournament in Ennistymon. We also took an 11-a-side team to a windswept cow-field in Co. Galway to play a challenge match against a Kinvara United panel. The challenge matches against the Tulla over 30s continued in 2008. 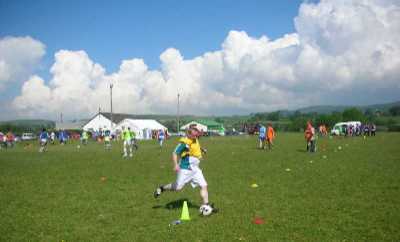 The inaugural Iniscealtra Community Shield took place in May 2008. This is an annual soccer tournament organised by Mixed Bag United, taking place in Scariff as part of the Iniscealtra Festival of the Arts. Teams come from far and near and all proceeds have been donated to the Ennis and Clare Samaritans. The 2008 winners, Jakko’s Bar, went on to retain the shield in 2009. The “sporting, fair and inclusive” ethos of Mixed Bag is reflected by the fact that the tournaments have attracted teams of mixed ability and gender.

2008 also saw us move our games to a couple of high quality new venues, namely the superb grass facilities of Tulla United FC (Spring/Summer) and the floodlit synthetic pitch at the Scariff GAA club (Autumn/Winter).

After the Amsterdam adventures of 2007, we established our Autumn international tour matches as a tradition in September 2008 with a trip to Edinburgh to play an 11-a-side challenge against a Heriot-Watt University select XI. The travelling squad of 13 players had a great time in the Scottish capital. As for the match, it was a very close encounter, which we lost 1-0. For the Christmas 2008 outing we returned to the tested formula of soccer, swim and meal in Ennis.

In September 2009, our Autumn outing took us to the sunnier climes of the Costa Blanca, where we played a 7-a-side challenge match against the Torrie Tigers of Torrevieja. A squad of eight players travelled on this occasion and we had a very pleasant stay in the seaside resort of Guardamar. We gave a very good account of ourselves in the grueling midday sun.

Time passes, some things change. Over the last few years some core members have moved away. The trip to Spain was the last one, though possible trips have been looked into, and could happen at some point. The Iniscealtra Community Shield has continued, and has been a huge success – to date almost €4000 has been raised for Samaritans. The venue for the last few years has been the all-weather pitch in Scarriff – the 2009 tournament nearly didn’t happen due to rain. I guess the success of the tournaments could be measured by the number of teams who come back year after year. The 2013 tournament will be the sixth, and as I write fingers are crossed for more of the glorious sunshine we had at the 2012 event.

The Christmas outings, too, have continued unabated – in 2012 it expanded to include a  quiz – and there’s something special in the pipeline for the end of this year… but my lips are sealed about that!

Because of the open and inclusive nature of Mixed Bag it’s probably true to say that no two Mondays have seen an identical mix of players turn up – this certainly makes for a nice diversity in the games. Numbers fluctuate, but we play weekly without fail, and it’s amazing how well it all generally seems to work, considering those random elements. Long may it continue…

3 thoughts on “A brief history of the club”